The best night ever 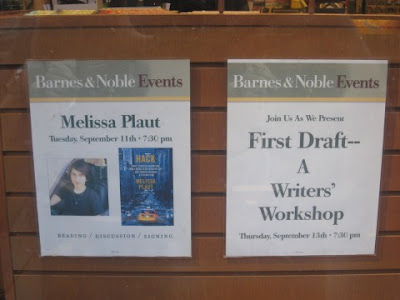 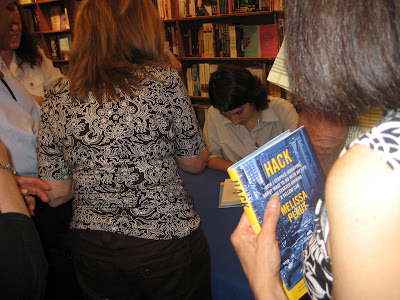 I had an amazing night on Tuesday. So many people came out and the store sold out of my book! The whole thing was pretty damn special. A few cabbies came out, one regular passenger was in attendance, lots of friends and family, and even a bunch of people I didn't know showed up. The room was packed, all the chairs were filled, and there were crowds of people standing in the aisles! It was probably one of the best nights of my life so far.

And I get to do it again next week! If you missed this event, or liked it so much that you want more, come see me read a whole different section of the book next Tuesday, September 18th, at 7:30 at the Barnes & Noble in Park Slope, Brooklyn (267 7th Avenue). Brooklyn people: Come out and represent!

In the meantime, something else amazing happened on Tuesday: I had the honor of reading an essay of mine on NPR's "All Things Considered." You can read it -- and listen to it -- by clicking here.
Posted by M.P. at 2:12 PM 49 comments:

Come celebrate with me!

Please come celebrate with me tomorrow night! I'll be reading from the book at Barnes & Noble in Greenwich Village, located directly across the street from my favorite late-night cabbie hot dog place, Gray's Papaya.

There will be a party immediately following, from 8 to 10, at a place appropriately called Happy Ending. It's at 302 Broome Street, between Forsyth and Eldridge, near the Delancey F and Essex J/M/Z trains. There will be drink specials.

I'll also be reading again next Tuesday, September 18th at the B&N in Park Slope, Brooklyn (7th Ave). It'll be all different material, so it'll be worth it to come to both if you can. 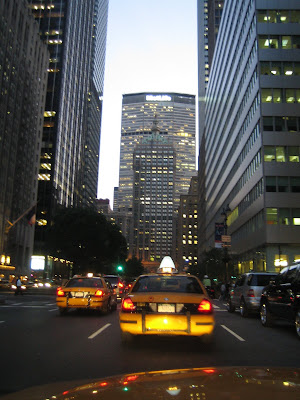 There's a taxi strike going on in New York right now. Some cabbies are indeed working, but there are plenty who are off the streets until tomorrow at 5:00 AM. I hope, at the very least, that all the media attention helps our cause a tiny bit.

I'm reprinting here the op-ed I wrote that was published in the City section of last Sunday's New York Times.

An Unwanted Passenger
By Melissa Plaut

DRIVING a taxi in New York City can be a grueling, thankless job. It is also a unionless job. But on Wednesday, many of the city’s 44,000 licensed cabdrivers are planning to go on strike for 48 hours to protest the new global positioning systems being installed in the city’s 13,000 yellow cabs.

While the Taxi and Limousine Commission supports these devices and has mandated that they be up and running in the city’s entire fleet by January, many cabdrivers — myself included — see this new technology as one big expensive headache. Perhaps the commission should listen to cabdrivers before pushing a device that we’d be better off without.

The device has no navigational abilities. The monitor, which is set into the partition separating the driver from the passenger, cannot be seen or accessed from the front of the cab. It does not give directions or plot routes. All it does is keep track of where you are — both on- and off-duty — and this information is then stored in the commission’s databases.

Officials at the commission say the primary purpose of the devices is to track lost property and make sure cabbies aren’t taking passengers from point A to point B by way of point Z. Sadly, there are some bad cabdrivers out there who take visitors for a “ride,” but in reality, we have much more to fear from our passengers than they have to fear from us.

However, for me and many of my fellow drivers, privacy issues aside, it’s all about money. With prices ranging from around $3,250 to $4,000 to lease and install each unit, the initial costs alone are enough to drive some cabbies out of business. For private owner/operators, this could kill their year.

The costs continue to pile up after the devices are installed. The test drivers who already have the touch-screens have reported finding the monitors covered in spray paint, stickers, soda and scratches.

Even without vandalism, the technology is likely to break down. New computers are often plagued with bugs, and sometimes, as every cellphone user knows, satellites can lose their signals. Because these G.P.S. devices will be linked to the taximeters, when the screen is vandalized, the computer breaks down or the satellite connection is unavailable, the meter won’t work. The driver will be forced to go off-duty and bring the car in for repairs. In a business where lost time equals lost pay, this is unacceptable.

One fleet already using the system recently lost its satellite signal, putting about 250 cabs out of commission for nearly three hours until the problem was resolved. This translated not only into fewer available cabs on the streets, but also lower incomes for those already beleaguered cabbies.

For drivers like me who lease our cabs from privately owned fleets, there isn’t the burden of paying for installation or repairs upfront, but the costs may still be passed on to us in the form of “surcharges” or “tax fees.” However the extra costs will be labeled, it boils down to the same thing: our expenses go up; our income goes down.

The only potential benefit for passengers I can see in these machines is the credit card slide. Matthew Daus, chairman of the Taxi and Limousine Commission, is happy to tell anyone who will listen that our tips are better as a result of this, but I beg to differ. Drivers have to pay a hefty 5 percent transaction fee while most stores and restaurants are charged an average base rate of about 2 percent. So those “bigger tips,” if they exist at all, simply don’t cover the costs. And since most cabs already have the ability to take credit cards, what’s the point of installing a whole new system?

The bottom line is, once we’ve installed the G.P.S. device, paid for its maintenance, ponied up for repairs and shelled out the transaction fees, what most cabbies will be left with is, in effect, a pay cut. The fare increase in 2004 just barely caught our incomes up with inflation, bringing us to just this side of a livable wage. We should not have to pay that back now.

By turning a deaf ear to the opinions and expertise of taxi drivers, the commission has approved a design for an impractical and costly device that ultimately does not provide any useful “service enhancements” to the public. So when cabdrivers go on strike this week, we can only hope that New Yorkers will stand with us in solidarity.

There are plenty of other reasons and arguments that I didn't have the room to include. Yesterday's Metro NY newspaper was one of only a few to hint at the relationship between the companies providing the systems and the Taxi & Limousine Commission (TLC):

One of the firms providing the devices is owned by Ron Sherman, president of an association of garage owners. That firm’s vice president is Jed Appelbaum, a former TLC commissioner.

Another NYC cabbie blogger, G.S. over at Cabs Are For Kissing, has this to say, among other things:

I think it was in 1979 that a city ordinance turned all taxi drivers into "independent contractors". This meant that if you worked out of a fleet garage you were no longer an employee, you were "self-employed" (and the fleets were no longer responsible for any benefits). Instead of paying drivers by percentages of the money they booked plus tips, the drivers now had to pay the garage a leasing fee for the use of the taxi for 12 hours, plus pay for the gas. There was no cap set on what the garages could charge (until recently, which is a good thing), so the only limit the garage owners had on their fees was by attrition of drivers. Busy nights when there were more drivers available meant higher leasing fees. And a cab driver found himself working six hours before breaking even.

Now here is the part that I consider to be a fundamental injustice: although the city made all taxi drivers "independent contractors" it retained the right to tell us what we can charge for our services. This is a blatant hypocrisy. How can anyone be an independent contractor when he can't charge what the market will bear for his services? How "independent" is that?

So it's phony. Taxi drivers are not independent contractors at all. We are actually employees who get no benefits.

But wait. It gets worse.

One would think that if the city government is going to create a taxi system that is unorganizable and then is going to mandate what we can charge for our services, a sense of fair play would ensure that the drivers are able to make a decent living. And be very diligent in increasing the rate of fare at timely intervals to keep up with inflation.

What the city keeps saying is that we have to pay the 2004 rate increase back now. Apparently they only gave it to us to pay for these stupid, useless machines that we don't want.

This new technology could've been really cool, but it is being implemented in the worst and most expensive way. A good navigational GPS device costs about $500. Why do we have to pay $4000 for a system that doesn't even help us find our way when we're lost?

The taxi industry in New York is so fucked up, it's depressing. But the saddest thing of all, in my opinion, is discovering just how much the city disdains its cab drivers. Mayor Bloomberg talks about us with the utmost condescension, like we're all simple fools who know not what we do. It's offensive.

Rather than paying attention to what we have to say, he's been painting this work stoppage as our effort to "hurt" the city and its residents. We are not terrorists -- though sometimes we may drive like we are! No, rather, we are people who work under third-world sweatshop conditions in one of the richest, most sophisticated cities on the planet. But our billionaire mayor has always held a low opinion of New York's working people, so why should we expect any support from him now?

If the city displayed any faith in us at all and actually tried to improve our working conditions, our morale -- and our driving -- would also improve, and then there would be no need for such derision and no need for a strike.
Posted by M.P. at 8:56 AM 42 comments: