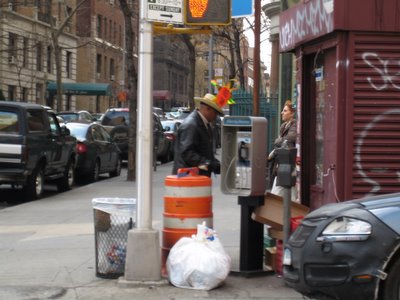 This guy had a sign on his hat that read "Free Tan." I'm wondering if he was offering a tan for free, or if he was protesting to win a person named Tan's freedom. Either way, weird hat. 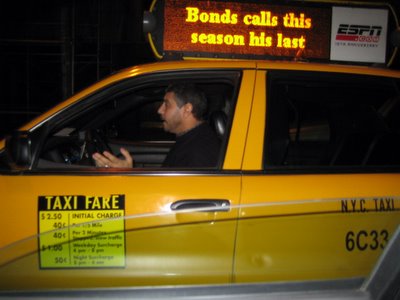 It was a long, disjointed night. I got into a screaming match with the cabbie pictured here. What sucks about writing this is that I spend so much time trying to defend cab drivers, but I have to admit, there are quite a few who drive like fucking animals. This guy in particular pulled a really fucked up move that forced me into oncoming traffic. We were both making the left turn from 11th Ave onto 23rd St. There are two turn lanes, so two cars can turn at the same time as long as they stay in the lane they were turning from.

I was in the left lane, this guy was in the right. But as he made the turn, he cut over into the left lane on 23rd, where I was heading, thus making me swerve onto the other side of the street. Luckily there were no cars coming and I was able to fall back in time. He must've seen this happen, because when I pulled up next to him after he finally moved back into the right lane, he rolled his window down and started yelling at me. Of course, he believed very strongly that he did absolutely nothing wrong and that I was an asshole for trying to turn next to him, even though that's what the traffic markers called for.

I was so pissed off, I started yelling back, and we drove side by side for a minute just screaming like maniacs at each other. He was saying, "You have a problem? What's wrong with you?" He was just so innocent. I replied, "I wouldn't have a problem if you learned how to fucking drive." He gave me the typical "Suck my dick." And I gave him my standard answer to that request, which is, "I would if you had one, but since you don't, you can suck mine!" My intention was to imply that his penis is so small that even a girl, who has no penis, still has a bigger dick than him. I couldn't tell if he was confused or offended, but right after that he turned down 9th Ave while I got hailed and picked up my next passenger. Either way, I considered it a victory.

As the night wore on, the club business increased. I picked up a guy on 7th Ave and W. 4th St going to the gay leather bar The Eagle on 28th between 10th and 11th (which is, incidentally, just down the block from Scores West). When we started talking, I found out he works for Virgin Airlines and is the guy who listens to your phone calls when you hear the message that says, "This call will be recorded for quality purposes." I am thrilled to know that someone really does listen to our phone calls when we talk to these companies. I did not reveal to him that our conversation was being recorded for blog purposes. 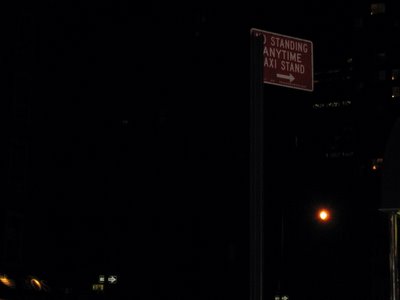 I had to take a bathroom break at one point, so I went to one of the places cabbies frequent for such purposes on 8th Ave between 55th and 56th Sts. This sign is posted there so that cab drivers can park without difficulty. Actually, the sign designates the block as a "Taxi Stand," which means we need to be in or near our cabs awaiting passengers. This is slightly different from the signs that say "Taxi Relief Stand," which means we can park there and leave the cab to eat and pee and do whatever else needs to be done. Both of these types of sign are posted in various locations all over the city. However, regardless of what the signs say, private non-cab cars always seem to be parked on these blocks.

When I pulled up to this one, there was one cab parked there and about eight or nine regular cars taking up the entire block. I really needed to pee, though, so I just double-parked and ran inside. There was no way I could afford to drive around looking for a legal spot. I wasn't gonna make it. And it just sucks because, even though these blocks are supposed to be reserved for cabbies, the cars that park there never get ticketed. On the other hand, if a cop came along at that moment, there is a high likelihood that I would've received a ticket for double-parking next to them. Why doesn't the NYPD enforce taxi stand parking, but then ticket the hell out of cabbies for parking illegally when we need to use the bathroom? I wonder if the cabbies who drive like animals would be nicer on the streets if they didn't always have to pee so bad. 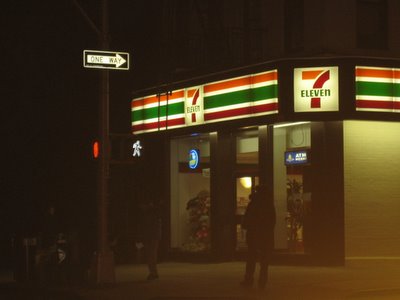 Earlier in the evening, I watched a kid unsuccessfully attempting to throw a pair of sneakers over the lamp post in front of this 7-11 store. The funny part of this is it was on York Avenue. (For those who don't know, that means it's a nice part of town). So of course an old man came up and yelled at him to stop.

Also early in the shift, one of my passengers had a great idea. I picked up a group of four on 5th Ave and 55th St going downtown. We were catching every green light until we got snagged in a small snarl of traffic and had to stop at the red at 35th. The guy sitting in front with me said, "We had a good run there for a while." I said back, "Yeah. But, actually, I'm a block off schedule. I can usually catch all greens until at least 34th St." To which he replied, "Cab driving should be an Olympic sport." If it was, I'd like to think I would qualify for at least a silver medal.
Posted by M.P. at 3:33 PM 81 comments:

On my trip I noticed two things:

1. No one in Florida uses their turn signal. Seriously. NO ONE.

Oh, wait, except for the old people. But they put their signal on three miles in advance, so it doesn't really count.

2. Florida Turnpike tollbooth operators are extremely nice. To the point that it's utterly disconcerting.
Posted by M.P. at 2:11 AM 49 comments: 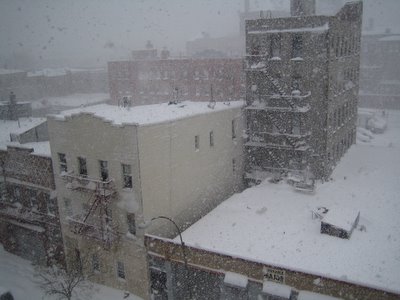 I didn't work last night for blizzard reasons. I initially considered trying to pull off at least part of a shift, but when I realized I had no way of getting to the garage since my car was completely buried, I said forget it. Besides, this is what part of my street looked like from my kitchen window before the storm was even over: 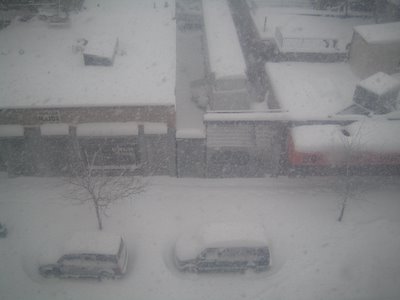 In other news, I'm going away this week to visit my 95-year-old grandmother. New York Hack will have to be neglected while I'm gone as I don't think I'll have easy access to the internet around there. I am turning this "Comment Moderation" thing on for while I'm gone, just so you know, so your comments will appear on the site eventually, just not right away. I'll be back to work Sunday night so check back after that if you want.
Posted by M.P. at 12:35 PM 61 comments: 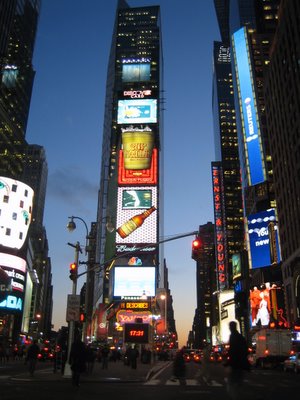 It was another night of relatively well-behaved passengers. My favorite ride of the evening was when I picked up two teenage girls who gabbed about boys the whole way home. After they got settled in the back, one turned to the other and said, "Okay, so who do you like more -- Simon or Andrew?" The other girl replied, "Well, Simon's cuter, but... I don't know... Andrew's cooler." Then she continued, "Oh, fuckin' Gabe! I found out he does like me. He is SO annoying." They continued discussing the ever-important boy situation until I dropped them off at their Upper East Side apartment building. By the end of the trip, it sounded like Simon was coming out the winner.

Later, a 20-something-year-old woman got in and, after a minute or two, said "I don't think he likes me." I turned around and was about to say, "Excuse me?" when I realized she had made a call and wasn't actually talking to me. Apparently she was just coming from a first date that didn't work out the way she had hoped. From what I could hear of her conversation, the guy had given her the old unenthusiastic "I'll be in touch" line at the end of the date and didn't kiss her when she gave him the opportunity. The moment sounded utterly cringe-worthy. When she got out, it occurred to me that I should've offered to set her up with Andrew. I hear he's cool and I think he's still available, even if he is all of fourteen years old.

And the most annoying ride of the night (which, luckily, wasn't even too annoying compared to other nights) was when three people got in at the Meat Packing District (of course) and wanted to go to Scores West. When I told them I didn't know exactly where it was, they stared at me blankly and just kept repeating "Scores West, Scores West" over and over again, as if that was gonna make me suddenly know the address. After saying it a few more times, they added, "It's a strip club." I replied, "That still doesn't help me." I could've taken them to any number of strip clubs, quite a few of which I'm very familiar with (from bringing passengers there, of course), including the Scores on the east side (60th between 1st and 2nd), but they were set on Scores goddamn West. Finally they figured out they could call 411. They got the address and I was able to deliver them to their fill of tits and ass. Now I know: Scores West is on 28th St between 10th and 11th Aves. Make a note of it.
Posted by M.P. at 4:31 AM 59 comments: 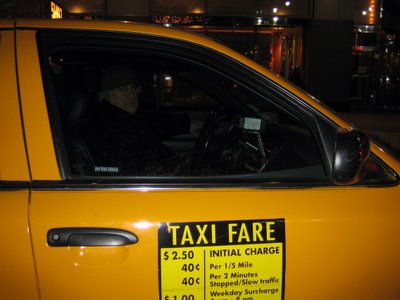 So I finally felt well enough to get back to work tonight. Most people seemed to be in a generous mood tip-wise, but not all. And I know this is a gross generalization, but I'm really starting to believe there is something wrong with French people. Most cabbies know that the second they hear a French accent, it means there will be no tip. Tonight, the French lived up to their reputation yet again when the ones I was transporting kindly let me keep the 30 cents change from the $9 they gave on an $8.70 fare. Granted, tipping is not customary in France, but still, isn't it spelled out in all the New York visitor's guidebooks? What the hell? Sometimes it's hard to resist the urge to say something to these people, to try and educate them on this city's customs, or even to be simple and snarky with something along the lines of, "Thanks, now I can buy that pack of gum I've been saving up for." But they probably wouldn't get it, so why bother? Fucking French people. Luckily the New Yorkers I picked up tonight were extra kind and made up for the few idiots I had to deal with.

Other than that, the night was pretty much status quo. Of course, the French not tipping is also status quo. So, yeah, a typical night.
Posted by M.P. at 4:19 AM 107 comments: