I hate Second Avenue, but I still love New York 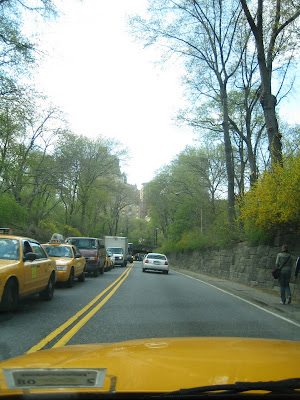 So, I finally drove a cab again after all this time.

When I showed up at the garage for my first shift back yesterday afternoon, my buddy Sam updated me on the situation on the streets these days. This is what cabbies do at my garage. They tell each other where the cops are waiting to give tickets, where there's construction, where they found good fares, and so on. But yesterday, knowing I hadn't driven in a while, Sam warned me about the recent surge in traffic, saying, "When you get out there, you'll find it a lot harder to move than the last time you worked."

I caught my first passenger right away, at the bottom of the 59th Street Bridge. He was a young, hipsterish-looking guy with long bleached blond hair. He was going to Central Park West and 73rd and when he got in, he politely asked me if he could eat his sandwich there in the backseat. I said, "Sure, as long as you don't get it everywhere." He promised to eat it over his bag, and I felt lucky that my first passenger in all these months was a nice guy with good manners. Though I was trying to keep my expectations low, it made me almost hopeful for the rest of the shift.

Of course, things took a turn slightly for the worse an hour later when I had my first near-accident/near-death experience of the shift. I was on Third Avenue and 23rd Street and there was a shitty Hyundai on my left that was running into a construction area and decided it wanted to be in my lane. It looked like they were about to rail right into my door but I had no room to get out of the way, so I just slowed down, leaned on the horn, and braced myself for the hit.

Luckily, at the last second, they skidded to a stop in front of the orange cones and waited for the flow of traffic to break so they could get in. It's a totally regular occurence on the streets of New York but still, I hadn't driven a cab in so long, I wasn't used to the aggression other drivers direct towards cabbies and I found myself a little shaken up.

Then around 5:30, I decided that I despised Second Avenue. It was the third time in less than two hours that I got caught in a bad jam there and I realized Sam wasn't kidding about the traffic. The only saving grace was the increase in the waiting time/traffic time on the meter that happened back in December. It made a significant difference and allowed me to relax a tiny bit despite sitting in hellish traffic. Without that increase, we would all be screwed and I don't think there would be many cabbies left in New York.

But things perked up again a little later. I was taking a guy to a screening at the Tribeca Film Festival downtown on Chambers Street and along the way we realized we both grew up in Rockland County, New York, about an hour north of the city. He was fifteen years older than me, but we had both gone to the same junior high and high schools and chatted about that for awhile. He was running late and we were trying to figure out the best way to the theater from SoHo and we agreed we absolutely must avoid Canal Street. It was just past 6:00 PM and Canal is always backed up because it lead in to the Holland Tunnel. It's seriously like a recurring nightmare for any cabbie.

So we went down Mott with the idea we would cross west at Worth, but Mott, of course, was backed up so we were like, fuck it, and turned down Canal anyway. And -- will wonders never cease -- Canal was clear! We were psyched, and we laughed about how sometimes New York can really suprise you. But, seriously, how pathetic is it that the big gift New York offered us last night was merely no traffic on Canal Street at 6:00 PM?

At 7:00 I passed another female cab driver as we were inching down Broadway, but she looked miserable and so I did not say hi.

At 7:45, I was turning past a couple standing on the median on West Street and overheard them say, "She's kinda young to be driving a cab."

At 9:30, I dropped off a passenger in Elmhurst, Queens. I called Diego to chat on the way back since I was empty but, turned out, he was dropping off just a few blocks away from me in the same neighborhood. We decided to race down to JFK since the hotline said they needed cabs there and it would give us a chance to hang outside of our cabs. 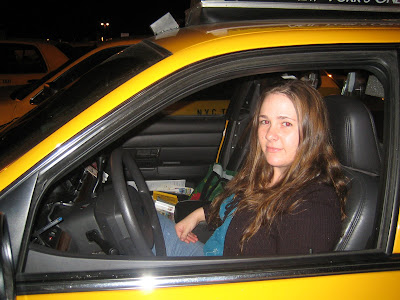 When we got there, it was like a big family reunion. I ran into Joy (pictured above), a female (obviously) cabbie I met three years ago, right after I got my hack license. We used to call each other every now and then but then lost touch. She seemed to be doing well and it was nice to see her again after all this time. 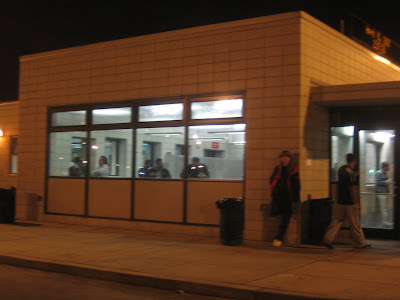 Then Diego and I went inside to get some food in the cafeteria and it was a madhouse as usual. Being in there is sort of like being a Moroccan souk or something, with the Greek guys behind the counter calling out prices and food items as fast as auctioneers and a motley crew of drivers mobbing the coffee urns and registers. I managed to skip most of the line since I only got a bottle of water and a bag of pretzels. 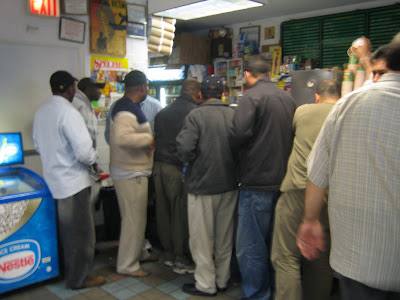 Outside again, I ran into another cabbie I knew. He does a Reggae radio show late night on 93.5 and I met him through another cabbie buddy John who does a radio show on WBAI. We all stood around talking shop and bitching about the TLC -- the usual. It's moments like that when I realize that I didn't so much miss driving the cab itself these past few months, but I missed the drivers, I missed the culture and ultimately, I missed the city.

Anyway, I got a good job out of the airport after only about a half hour and the night ultimately ended without any real mishaps or shake-ups. I considered it a good welcome back.

This makes me remember something else Sam said yesterday afternoon at the garage: "This job is like being a drug addict. You have one great night and you're hooked and keep coming back for more. But when you have those bad nights, you just wish you could quit." 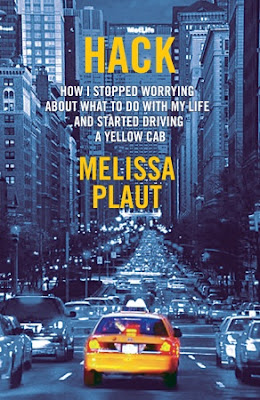 How fucking exciting! Of course, the actual book is not out yet. Plans for a hardcover edition have been scrapped so it will be a paperback original, which means it'll be more affordable. And it looks like August 28th is the big date, but you can pre-order it from the Random House website by clicking here.

In the meantime, I'm off to the garage for my first shift in a good long while, so there will hopefully be a story or two here tomorrow, but for now I just needed to say HOLY SHIT I WROTE A BOOK.
Posted by M.P. at 12:25 PM 60 comments: 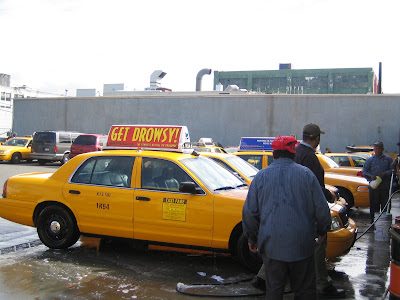 I went back to the garage today. It had been the first time in months and I was all geared up to work the shift. When I arrived, it was busy and bustling like always and all my old buddies were there. We stood around and caught up for a while as the day drivers trickled in and Richard dispatched the night guys out. 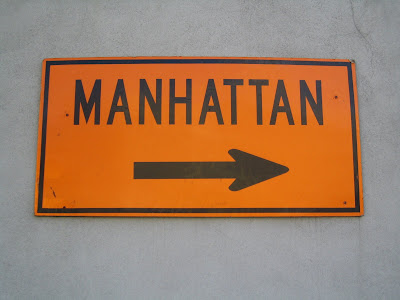 I found myself actually feeling a little nervousness, since I hadn't driven a yellow in so long. I knew I was rusty and wasn't totally confident I could find my way around as easily and naturally as I used to. Luckily the garage has this sign (shown above) posted on the wall outside, just in case.

Not too much else was new around the old garage. The only exception was the sign shown below. I guess the level of general retardation has risen pretty drastically, along with the gas prices. 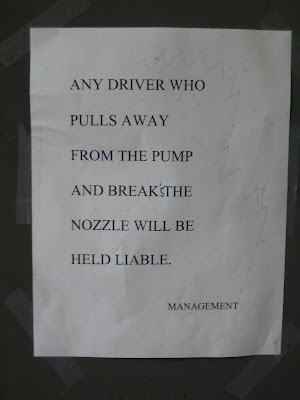 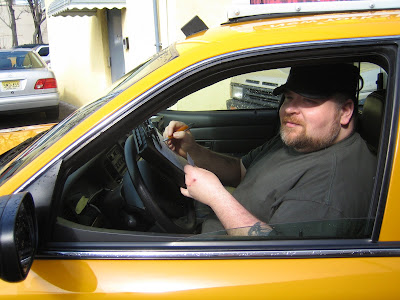 After about an hour, Diego got his cab and took off. Here he is, trying to look mean but not really accomplishing it. I hung around a little while longer until I heard my name over the loudspeaker. I went inside, but it was a false alarm. Turns out Richard wasn't gonna have a cab for me today after all. He was overloaded with too many guys and not enough cars and had, in fact, already sent a few other drivers home. I couldn't really be upset about this since I did just sort of show up at the garage unannounced.

Oh well, it wasn't a huge deal. I'll work next week and it'll be fine. Plus it was great to catch up with everybody and see their faces again. I do kind of love just hanging out at that garage sometimes. Really the only shitty part was that, as much as I've been dreading and procrastinating getting back in the cab, I was actually pretty disappointed to not work tonight. I mean, I wasn't fucking heartbroken or anything, but I had gotten myself all psyched up to get behind that stupid wheel and make some money. Oh well. So now my big prodigal return to cabbing will have to be postponed for one more week. I better enjoy it.
Posted by M.P. at 4:40 PM 19 comments: