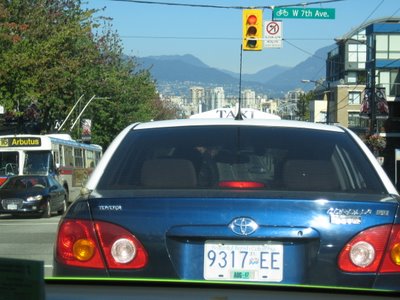 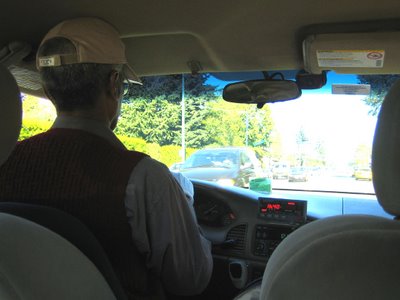 [Updated to include photos]

So I'm in Vancouver. "On vacation," as they say. I haven't driven a cab in a few weeks. Instead, I spent that time completing the first draft of the book. Which I accomplished. And when I get back home next week, I will probably have my editor's notes for the second draft and get back to work on it. But I also plan to get back in the cab, even if it's on a minimal level.

Anyway, I arrived here in Canada yesterday and, of course, I'm experiencing a tiny bit of culture shock. It's been a little while since I left New York last, and everytime I do, there's a small transition. It's really quite beautiful here, and also incredibly quiet, to the point that it's creepy. I'm not used to it, but I can see the appeal.

So, of course, the first thing I did after leaving the airport was get into a taxi. The one we got was green and white, though there are plenty of yellow cabs around. I was a little skeptical at first that our ride would be slow and boring because this city seems so clean and pristine, but it turned out to be okay. Our driver had on flip-up shades under the brim of a tan Vancouver baseball hat. In the taxi, he sat up so completely straight that the top of his head was in constant contact with the ceiling of the car. He also had on spotless white gloves and drove with his arms at the strangest angle.

At the end of the ride, I decided I totally approved of his moves. I mean, he didn't do anything particularly special or out of the ordinary, but he definitely had that quick, efficient, get-you-there-in-one-piece-but-fast style that I have tried to perfect in my own driving.

The only other thing of note was that when I tried to buy cigarettes, they didn't have my brand. I didn't recognize most of the others either, so I resorted to treating the girl at the 7-11 like a salesperson who works on commission, asking her, "Can you recommend a good light cigarette?"

She handed me a pack of "Canadian Classics Lights" and said they were "popular." I bought them. They're alright.
Posted by M.P. at 12:49 PM 53 comments: 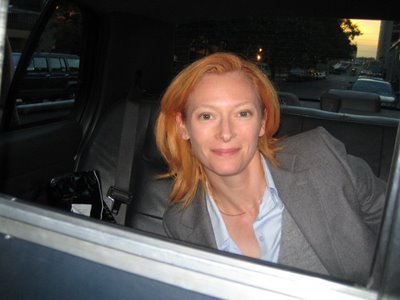 The woman pictured above was my first passenger last night.

Actually, she was my only passenger last night.

And, actually, it was all totally staged. Do you recognize her? In case you don't, she's an actress and her name is Tilda Swinton. I was recruited a few weeks back to play her cabbie as part of a project by artist Doug Aitken. He's working on a bunch of film scenes that will be projected on the facade of the Museum of Modern Art this January.

Last night was a little piece of the project and I was happy to participate, even though I don't think my presence will be too prominent in the end. Still, hopefully I'll be able to see myself on the MoMA walls it when it's all finished. There will also be a companion book that will feature, among other things, an interview with me.

Anyway, it was a totally new and fascinating experience, despite the initial waiting around that, I gathered, is the norm for any kind of film shoot. I showed up just before 3:00 pm and just sort of hung around for an hour or so while the crew got everything ready. Then Tilda pretended to hail me and I pretended to pick her up a few times. After that, the cab was rigged onto a trailer and we "drove" around the upper west side and Times Square. 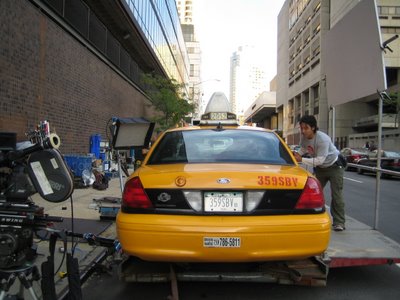 I think that was my favorite part: Riding around a foot above the normal height pretending to drive a cab. It's far better than actually driving a cab. I was struck by how many people on the street gaped and gawked at us, took pictures, and yelled stupid comments. I'm so used to being sort of invisible in the cab, so this was utterly strange to me.

At one point, when we were passing FlashDancers, the Gentleman's Club, one of the doormen there called out, "A lady cab driver? Now I really don't believe it! There are no lady cab drivers in New York!"

Under normal circumstances I might have given him the finger, but I decided to hold off on that this time. The stupidest part of this guy's comment, though, was that I actually met him in my cab not too long ago. When a cab drops off its breast-hungry schmucks at FlashDancers, the doorman usually hands the driver an envelope containing a three dollar "tip," a letter written in every conceivable language encouraging cabbies to continue dropping off at this particular strip club, and a voucher or two for free entry to the club that we can give to our "favorite passengers." This very doorman, who couldn't believe a "lady cab driver" existed, had himself handed me this little package not too long ago. Clearly he has a short memory.

Overall, the night was a lot of fun. The lights were pretty, the not-actually-having-to-drive was wonderful, the people were all really great, and I think the project is going to look incredibly cool when it's finished. 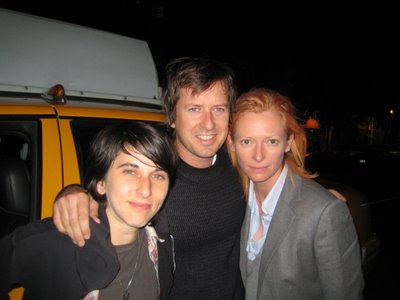 At the end of the night, the director and his cast posed together for a picture.

Now I know what my next career move needs to be: Professional Fake Cab Driver.
Posted by M.P. at 11:41 AM 113 comments:

The year in review 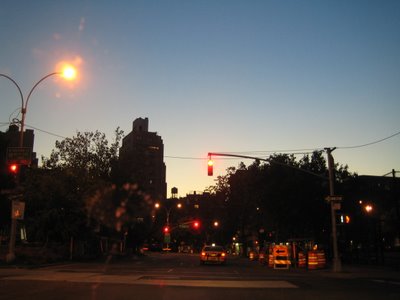 It's been just over a year since I started this thing, and since I'm not working this week, I figured I'd do a little yearly wrap-up/question-answering thing.

Basically, I started this blog last August after my dad gave me a digital camera for my 30th birthday. (And since so many people ask, it's a Canon Powershot SD 300).

I just turned 31 on Friday.

In the meantime, sometime around March I think, I got a book deal with Villard, an imprint of Random House.

Also in the meantime, over a million "unique visitors" (whatever that means) have looked at this blog.

I'm in the process of finishing up the first draft of said book, and these next few weeks are the final push, so I will probably be driving the cab even less while this is happening.

Let's see. What else?

Even though I just renewed my hack license last month, I don't plan on driving the cab forever, or even for too much longer for that matter. But, then again, I've been saying that for almost a year already, so who knows. This job is like quicksand in that it just has a way of sucking you in, it seems.

I did my first public reading last month as part of a fundraiser for the Taxi Worker's Alliance. Despite my utter stagefright (I'm more afraid of reading in front of live actual people than I am of driving a cab at night in New York), it seemed to go pretty well and the Taxi Worker's Alliance gave me a free t-shirt. A week after this, a friend of mine took a cab home to Brooklyn and had Kevin Fitzpatrick, one of the organizers, as her cabbie. When she told him she saw him at the fundraiser, he gave her the ride for free and refused to take any money from her at all.

I will be doing another reading on October 17th at the Educational Alliance as part of a series called "Writers at the Alliance." I'm already scared to death.

Anyway -- and this is where it gets a little corny -- I just wanted to say that driving the cab these past few years, and even doing this blog for the past year, has made me feel brave enough to try anything, to embark on other adventures, and to push for a variety of new experiences in my life. That was the whole point of getting my hack license to begin with: I wanted to try something new and completely foreign to me while making a living and without having to settle and commit to some shitty "career" for the rest of my life. And it has worked out pretty well so far, all things considered.

Everyone knows I'm not in love with driving a cab -- I mean, it is indeed a love/hate relationship, but the hate definitely wins out as the more prevalent feeling. Still it's been precisely these ups and downs that have brought me the greatest amount of joy, heartbreak, and of course, aggravation, none of which I ever would have experienced to this degree doing any other job.

I'm still driving, though much less these days, as some of you have noticed. On top of trying to finish the book, I am in the process of trying to figure out what my next step will be job-wise. So, who knows, you may log on to New York Hack one day only to discover that it's the blog of an ex-cabbie turned animal welfare cop, or Red Cross worker, or Peace Corps activist, or weirdo ranch hand, or whatever else I may try my hand at in the future.

So, anyway, this is just to say happy new year! And thanks for reading.


***[UPDATE: Because there seems to be some misunderstanding here, I would like to clarify that I have not quit yet! This was not supposed to be a farewell message or anything. I'm still driving and will probably pick up more shifts once the stupid UN General Assembly is over later this month (even though it hasn't even convened yet), because I no longer have the heart for that kind of traffic (see September 2005 Archive for why). Anyway, yeah. You can't get rid of me that easily.]***
Posted by M.P. at 7:19 PM 102 comments: