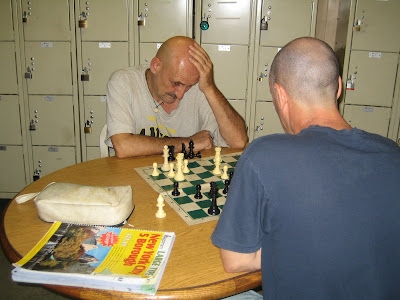 When I got to the garage last Thursday afternoon, my old friend Gary (seen above in deep concentration) was back from Vietnam, where he's been living and teaching English for the past five months. We caught up for a bit and then he went into the waiting room to play a game of chess. 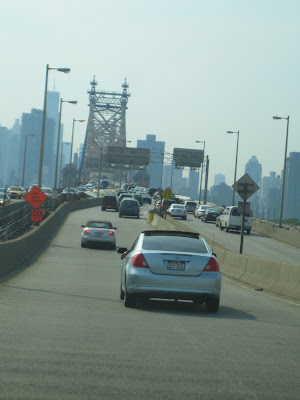 I got out after an hour and a half of waiting, but spent another half an hour sitting in traffic on the 59th Street Bridge. I tried to think of Gary and his new Zen approach to driving and traffic. It actually helped a little. 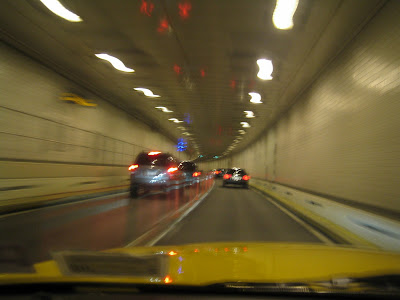 Business was pretty steady all night, but I had a long lull when I made a few back-to-back trips to Brooklyn. The first was to Midwood, a suburban-ish neighborhood largely occupied by Orthodox Jews. It was a decent job but it took forever to get there for some reason, so I hustled back to Manhattan as fast as I could. When I finally got over the Brooklyn Bridge, I turned south down Broadway and was immediately hailed by a Hasidic man.

When he got in, he said, "I'm going to Brooklyn, take the tunnel." He was, of course, going to Borough Park, just a few neighborhoods west of Midwood.

Later on, when I talked to my fellow cabbie Allen about this turn of events, he said, "What? You picked up a Hasid?" Allen himself is an Orthodox Jew. "And he went to Borough Park?" When I said yes, he laughed and said, "Well, what did you expect?!"

Again, it took me forever to get back. The BQE was backed up so I decided to take the surface streets instead. Nearly 60 blocks later, in Park Slope, I picked up a passenger. I felt lucky for a second, thinking he was going to the city, but as it turned out, he was only going a short distance, out toward the Brooklyn Museum, a six dollar ride.

He was a young guy, good looking and a little drunk. When I asked what he'd been up to that night, he said, "Oh there's a group of us that started a gay volleyball league. We had a game and then went to the bar."

Then he launched into the very astute observation that I am a female cab driver, and asked if it was harder for me in terms of having to pee. I said, "It's not the easiest thing in the world, mainly because it's hard to park."

He said, "You know it's funny, because I was just now talking about this with my friend and it was the last conversation I had before I left." He gave me some backstory. "Okay, so apparently Oprah has this word for her crotch -- she calls it her vajayjay. Have you heard that?"

I said no, and he went on, "Well my friend made up a parallel term for guys and so before I was leaving tonight, he was telling me about his majeejee."

O-kayyy. I figured he was talking about the penis, and having not much to say on the matter at the moment, I just nodded and watched the street.

He continued, "Yeah, because he was about to go on a date with some guy he'd never hung out with before and the conversation centered around whether or not he should clean out his majeejee."

It took a second to sink in, and I said, "Oh! Wait-- You mean?-- Ohhh...I thought you meant like the front. But I guess you're talking about the back. Huh. Okay." I wasn't quite sure what to say from there, but he was eager, seemingly happy to be communicating, and continued, "Yes! It's our 'mangina.' Hence, majeejee."

Then he stopped for a second, looked around the cab, and said, "Wait, I'm not on 'Taxicab Confessions' right now or anything, am I?"

I dropped him off, raced back to the city, and didn't have a ride back to Brooklyn for the rest of the shift.

I can't believe some of the things people tell you!lol

wow thanks for the enlightenment to think I never knew this ;)

Hey MP, Wow great to hear from you. The adventures on your shifts are never ending. Oh by the way that guy should only know that he was being driven by the star of a newly to be published book. So the hell with taxi cab confessions. Thankx for the update.

all I can say is only in NY. I'm sure these little convo's make your night. Your story's are great can't wait til the book

That gay guy got it all wrong - vajayjay comes from the doctor on Grey's Anatomy who talked about her own while she was pregnant.

Oh my yes, thanks Oprah!

Strange things (actions/words) do happen in cabs, don't they?

I've adjusted to people spilling to me in my line of work. It's kind of par for the course. But it's reassuring to know that TMI knows no occupational boundaries.

Yes, I believe Oprah appropriated it after the Grey's Anatomy episode coined it. Now Oprah says it all the time.

Oprah complains about her hurting vajayjay.

oh but that ride was worth more than gold- HILARIOUS!

Hi, Melissa. Great story, and great blog! Among other things, it's a terrific resource for people who are thinking about driving a cab. You show them what the job's really like, confessions and all. Congrats on the book, too.

I run a blog about workforce development and job training issues, and I'm going to have a post about cabbie blogs tomorrow. it will include a link to New York Hack.

If you thought about being bysexual might double your chances of scoring at parties!. But could you handle the rejection of being rejected by both sexes.
The whole world is sitting in the back of a cab

Didn't it occur to that gay guy and his pal that women have so-called manginas, too?

I just discovered a link to your blog on my favorites page. I'm really happy to have rediscovered it. Your writing is sharp and funny and insightful--I can't wait until your book comes out. Congratulations!

Great to hear your updates again was missing them. I love your picture keep them coming even if its just a few words. You give the vibrance of the Old New York mixed in with the new. I visited there in 1985 and then 2006. I still loved the place thye difference is I could walk round with my camera in view LOL. Though I still loved the old New York. LOve your blogs plus all the commnents.

Ooops...
Well, boys 'n' girls, looks like we've slipped over that wuthering height known as Too Much Information!

I had heard of vajayjay (from Grey's Anatomy), but the whole mangina thing threw me!

I learn so much coming here.
:)

Congrats on the book!

Melissa, was the young guy, Mr.Majeejee, a Hasid?

LOL! That's a story for sure. Majaajaa and vajaajaa....oh boy.

Oh, wow! This is too funny!
Thank you for my first laugh of the day.

lol, great story, remind me to keep it zipped if I get in your cab!

I'll be in NYC in October...if I am lucky enough to end up in your cab I will NOT ask you about being a female cab driver nor will I talk about my privates...if I say something like "Seattle loves your blog" then you'll know it's me!

I've written a post about you. I hope you don't mind.

I started watching this blog more than a year ago and altho8ugh I have never been to the United States I feel as though I know New York well and there seems to be a commonality to your daily gring. What I see it is "Although every day has its challenges with situations and people, you keep movin on, never looking back.

Thanks for letting me in on your world Melissa and if I ever get there from Canada, I would like to see it first hand.

I love your stories and your pictures! Congratulations on the book also, I love the subtitle. I can't wait till it hits the shelves

I'm making a massive 3D NYC replica. Your cab is down there, well somewhere.

Yahh, you're back.
I'd stopped by a few times, but missed the stories.
Looking forward to the book August 28th.

You, my dear, have a way with words and so graciously invite we readers to experience and enjoy your taxi rides.

Seems to me that you already have a rapt audience in place awaiting the arrival of your first book. I am sure there will be more to come. Bon Chance!

Please stop by when you have a chance to relax and read. Cheers!

You should be on Oprah about your book.

Yo ho ho MP, Glad to see you're still around, blogging and driving:) I guess I'll make yours the first book I've ever pre-ordered. Too bad about the hard cover, though.

Great Work!
That was really fantastic. Ride was just like a ride in limo.
it Was FUN !