But that's because I'm writing a book, which I'll be reading from tomorrow night. You should come!

It's part of a reading series called "Writers at the Alliance" and there are two other readers, both much more accomplished than me, so it shouldn't suck.

Anyway, it's FREE, so come out if you can.

HERE IS NEW YORK: THEN AND NOW
Tuesday, October 17
7:00 pm
In his foreword to "Here is New York," written in 1948, E.B. White asserted that "it is the reader's, not the author's, duty to bring New York down to date." The Alliance has enlisted three very different writers with that task, beginning with Caleb Crain who chronicles the extravagances and vanities of New York's upper class in the nineteenth century. Next, Brandon Stosuy delves into the downtown music scene of the 1970s and continues through to 2006, noting outerborough shifts along the way. Finally, Melissa Plaut, a blogging cab driver, keeps us "down to date" with her present-day account of life behind the wheel in New York City.

CALEB CRAIN has written essays and criticism for The New Yorker, The New Republic, The New York Review of Books, and other publications. He is the author of American Sympathy: Men, Friendship, and Literature in the New Nation (Yale, 2001), and is at work on a history of the divorce of the nineteenth-century theatrical couple Edwin and Catharine Forrest.
See http://steamthing.com.

MELISSA PLAUT was born in 1975 and grew up in the suburbs of New York City. After college, she held a series of office jobs until, at the age of 29, she began driving a yellow cab. A year later she started writing "New York Hack," a blog about her experiences behind the wheel. Within a few months, the blog was receiving several thousand hits a day. She is currently working on a book based on "New York Hack" to be published in 2007 by Villard. See http://newyorkhack.blogspot.com/

BRANDON STOSUY, a staff writer and columnist at Pitchfork, contributes regularly to The Believer and The Village Voice and has written for Arthur, BlackBook, Bookforum, LA Weekly, Seattle Weekly, and Slate, among other publications. His Danzig-heavy meditation on Sue de Beer appears in her EMERGE monograph (Downtown Arts Projects, 2005) and an essay he co-authored with Lawrence Brose is collected in Enter at Your Own Risk: The Dangerous Art of Dennis Cooper (FDU Press, 2006). He's currently curating The Believer's 2007 Music Issue Compilation CD while finishing a discussion with Matthew Barney and essays on Wayne Koestenbaum and Gordon Lish, also for The Believer. Up Is Up, But So Is Down, his anthology of Downtown New York literature, will be published in October by NYU Press. See
http://www.amazon.com/but-So-Down-Literary-1974-1992/dp/0814740111/sr=8-1/qid=1158554986/ref=pd_bbs_1/002-2161039-3765661?ie=UTF8&s=books

Writers at the Alliance, the Educational Alliance's reading series, brings together established and emerging novelists, poets and essayists whose work, in both form and content, reflects the energy, diversity, and history of dissent which have always characterized the Lower East Side. 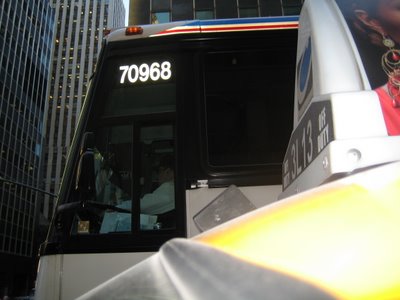 When I got to work today, I was assigned a brand-new 2007 model taxi. It only had about 6400 miles on it, which probably makes it about six weeks old. It was clean and pristine and it still smelled new, and as I was pulling out of the lot, one of my fellow drivers joked and said, "Don't scratch it!"

Of course, within an hour, the bus seen above nearly took my right side mirror off. Luckily, I was able to avoid it, even though I was still a bit rusty from having not driven any kind of vehicle in a month.

It took me that first hour to warm up and get my rhythm and confidence back. But after that, everything was back to normal. The only real problem for the rest of the night was that I was constantly distracted by some gum on the sole of my shoe that kept sticking to the pedals.

Things could definitely have been worse.
Posted by M.P. at 3:41 AM 39 comments:

Guess who's still not working?

I'm back, but it seems I've got a low level case of whatever this plague is that's been going around, the one with the incessant coughing and foggy head. It seems I caught it a few weeks ago, gave it to a few friends, got better, went away, came back, and then caught it again. So I'm avoiding the cab until next week. I wonder if those Canadian cigarettes had something to do with it.

And, on top of not feeling 100% health-wise, I'm having trouble finding the enthusiasm to get back into the swing of cab driving. Have I ever mentioned that I hate not only driving a cab, but also just driving at all? Or even being a passenger in a car? I much prefer the subway, even with all the pushing and positioning that goes on down there. It's just so much less stress. Even when I'm stuck in a tunnel in a crowded train, I'm still much more at ease than when aboveground, stuck in traffic.

My tolerance for the street was never this low until I started driving a cab. And now it appears I have some sort of visceral aversion to being strapped in to any kind of road vehicle. I've also become the worst back-seat driver that ever existed. If you knew me and owned a car, you would not want to take me anywhere at all, ever, because not only would I tell you how to drive, I would also tell you exactly which route to take and why you should take it. I would not only aggravate the shit out of you, I would bore you to tears describing traffic patterns, light times, bad intersections (and why they're bad), bridge & tunnel approaches, red-light cameras, and so on.

So, yeah, I hate to drive, but I'm real good at driving other people crazy.

Perhaps this means my next adventure should be some sort of job with the MTA or the Department of Transportation.