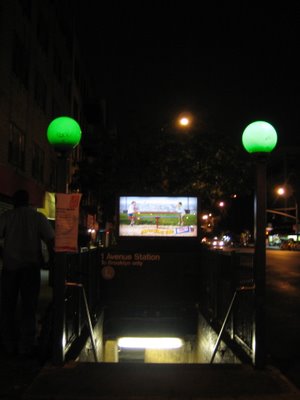 I know it's inconvenient for a lot of people, but I have to say thank goodness for MTA construction. The night was pretty slow until the L train to Brooklyn shut down at midnight, and I ended up making lucrative little circles between 14th Street and Williamsburg. It helped my earnings quite a bit.

My oddest ride of the night, however, happened earlier in the night when I picked up a 20-something-year-old woman coming out of Flashdancers, the strip club on 52nd and Broadway. She was going to Park Slope to look at an apartment and her speech was slurred in a really weird way. She didn't seem drunk, just out of it, or maybe a little crazy. Or on pills, perhaps.

Anyway, she was busy on the phone for a lot of the ride. The first call sounded like total nonsense. I only caught snippets, but they were weird enough to get stuck in my mind.

She was speaking to someone named Elizabeth and she was mad at her because she wanted to go out and party tonight. She said, "I'm tired. I'm not going out. I did my deal, and I totally need liposuction. But I'm off work tomorrow." After a brief pause, she said, "You really need to move out of your dad's house. You're seventeen. I practically raised you."

When we pulled up to her destination, she paid the fare, but then wouldn't get out of the cab because she dropped her phone somewhere in her huge purse and couldn't find it. She turned to me and said, "You're hot," and then, "Oh, my phone! My boyfriend is gonna think I'm crazy."

She sat there for a few minutes calling out to her boyfriend on the other end of the phone, saying "Hello? Hello? Hello?" and instructing him to yell really loud so she could hear him and locate the phone. After a few tries, she finally found it.

She held it up like a prize, grinning like a chimpanzee, and then shoved it through the partition at me. She looked and sounded completely insane when she tried to get me to say hi to her boyfriend.

Not wanting to be rude, I said "Hi," but I also found myself really wanting her to get out of my cab already, so I added, "Okay, well, have a good night!" But she apparently wasn't ready to go yet. She got back on the phone with her boyfriend and just sort of continued casually chatting with him while not making any motion to leave. She was laughing and still slurring as she explained to him exactly how she lost her phone in her bag but now she found it. I'm sure he was fascinated.

At this point, the meter had been off for a while and I just wanted to get her out and get on with my night, so I repeated myself two more times, getting louder and louder so she could hear me over her own conversation.

There was no response from her as she just kept chattering along.

This snapped her out of it and she seemed to remember where she was. She said, "Huh? Oh, right, yeah. Thanks cab driver!" as she got out and slammed the door.

Yeah. It wasn't only her boyfriend who thought she was crazy.
Posted by M.P. at 4:19 AM

Some crazy people. I really enjoy reading your blog. Keep it up!

Btw whats it like riding the subway really late at night? I never had a chance to do that..and probably wouldn't :S

she makes the rest of us look positively normal. And we all know about normal people right? It's 4 a.m. and I'm leaving for the dayshift cab, I hope I don't run into her ....or Elizabeth!

man, nyc sure got some kooks...

be careful out there :)

did she at least tip well for sitting there forever?

If not her, then I've had one of her relatives in my cab before.

Or it could be that the use of cell phones has triggered a formerly dormant portion of our brain that induces stupidity after longterm exposure to 800mhz radio waves.

Nothing like the prose of conversation snippets to really create a character. Hemingway was a master of this... but as you of all people know, Truth is stranger than fiction.

Thats nuts she wanted you to say hello to her boy freind that is crazy.

Maybe she went to some quack and they accidentally liposucked her brain instead of her butt.

Whatever breaks up the monotony, huh?

I get so many boring and self-important customers at my job, I welcome the semi-crazy ones.

The subway is rarely effected by time in the Outside World. It sort of runs as it's own, underground galaxy. It's pretty much the crappiest galaxy out there, though.

Personally I try to talk to as many crazies as I can. They usually have really great stories, even if they were made up or hallucinated.

Maybe the post shoulda been titled "Williamsburg". I hear crazy stories about people from there all the time, but thats not saying much given that I'm from the other part of Brooklyn myself, and have more than my fair share of misadventures...

I think there's a plethora of crazy people in Williamsburg and Park Slope, but that's just me talking. I just found your blog the other day and it's great, but I imagine you hear that enough as it is.

Ah, New York City. The colorful people, the sites, the sounds...the colorful people. :) I'm glad she was a "harmless" crazy lady.
Hmmm...sounds a lot like an old roomate, actually. (shudder)

Maybe she was schizophrenic and popping the pills, would've explained a lot! Either that or som silicone surgery gone wrong.

Keep up the great blog! Can't wait to read your book!

I can hardly wait for your book to come out.

I just got back from a week in Japan and you WOULDN'T BELIEVE their taxi cabs.

They all drive these big Toyota Crown cars (almost all of them are black). The majority of the cabs have LACE SEAT COVERS. All of the guys who drive taxis wear jackets with white shirts and ties. There were even a couple who were wearing bow ties. Likewise, a couple of the drivers were wearing white gloves. Can you believe this stuff.

One thing I don't think you'd have to mess with in Japan as a taxi driver would be rude passengers. For the week I was in Osaka, I never met a rude person.

I just got back from a week in Japan and you WOULDN'T BELIEVE their taxi cabs.

They all drive these big Toyota Crown cars (almost all of them are black). The majority of the cabs have LACE SEAT COVERS. All of the guys who drive taxis wear jackets with white shirts and ties. There were even a couple who were wearing bow ties. Likewise, a couple of the drivers were wearing white gloves. Can you believe this stuff.

One thing I don't think you'd have to mess with in Japan as a taxi driver would be rude passengers. For the week I was in Osaka, I never met a rude person.

O.K., O.K., so she was crazy. But did she look hot and was she scantily clad? Why didn't you ask to take her picture?

Phew; my ex lives in parkslope.. Would be so ironic if that was his girlfriend! LOL!

we want to hear more about the cab fundraiser, how are things going, are you doing anything special, what do you hope to accomplish, where do you want things to go, what specifically do cab drivers want the public to do? are there any political parties which are more responsive to your interest group?

It sounds to me like she was a stripper. That would explain the lipo mention, and the "I raised you" conversation (assuming she was speaking with an underage stripper she helped train). I hear some strippers like to do some pretty crazy drugs while they're at work.

Sounds like my old friend The Stripper Who Fucked Everybody But Me.

You must somehow like the insanity of NYC or you would get the fuck out of it.

I've never met a New Yorker I didn't like, once they got away from that rat race.

In the words of one of my coworkers, "Wow, that girl is special."

Aw come on, MP. We both know that you have some commenters who are probably even crazier than that girl.

Haha, sounds like my day at the Psych hospital where we get all this drunk and crazy people! Good work, M.P. Really looking forward for your book! I enjoy reading your blog and will always be a fan!

i know a stripper she's pretty hot too

i always enjoy reading but never comment but this time the lady reminds me of my ex but she lives in Johhanesburg and theres a possibility that she is a prostitute.

Your blog is brill...everytime I read it, it just seems crazier! I absolutly love New York and hope to get there one day. Its good to read about the 'real' NY. I'v only just started reading your blog this week, I got it from Hollaback NYC and now i am hooked to New York Hack!
Best of luck on saturday night and big shout out to the Irish living in New York!!!
(Also.. hope everything goes great for your book release!)

D-R-U-N-K stripper. Just thinking about it makes my testicles itch.

Hey, M.P.: Check out Nontraditional Employment for Women. You may not have the physical strength to do every job they offer training for, but you've got the figurative balls to do the ones that don't require a lot of physical strength.

Driven my share of strippers here in New Orleans to work usually...I'm a lady cabdriver too ! Enjoying your BLOGS ! Keep it UP !

Enjoyed this one a lot, MP.

If you ever decide to diss being a cabbie, you could put on your next job application: " Master of avoiding disaster " .

this is addictive reading, thanks.

I remember cab rides from 14th to Williamsburg....

I was just in the City for a few days only again, I sure did miss it, even the pee-pee smell in the subways

So anyway, i wander in here and read and reflect and smile, thanks for writing.

She may have been diabetic.

I'm pretty fraking certain there's a special circle in hell reserved exclusively for the bastard that invented the cell phone.
I have to carry one in connexion w/ my job...I call it "the digital leash."
Our "on-call" pager was replaced with one of the damned things, and it really makes you look smart when it goes off while you're fending off a call on the OTHER company phone.
I go to a bar nowadays, and everyone's watching TV and talking on the goddamned phone! You could do that at home for free!!!
Go into a public toilet, and sure as (LMAO!) shit, somebody's talking on the phone while taking one!

New York City is indeed a place full of kooky people, crazy stories, etc. So many of my favorite stories come from Manhattan, including the one I heard from a friend of mine who walked into a bar near Hell's Kitchen and there was no bartender; you just went in the back room, pulled a beer out of a barrel filled with ice, and paid the guy who was there. And the bathroom door had no hinges, so she had to pick up the door, move it aside, go in the bathroom, and pull the door back in place.

I don't think the place is around anymore...

I read your comment. Thanks for your kind information. If you want to contact me please mail at jonwismith@mail.com